The 49th AGM of the Berwickshire Civic Society was held last week at Thirlestane Castle. As the Society look ahead to its 50th anniversary the meeting heard how Thirlestane Castle Trust is positioning itself in the 21st century.

Edward Maitland-Carew, Resident Trustee of Thirlestane Castle Trust, gave a talk to Society members explaining that the forced closure of the Castle in 2012 due to extensive dry rot, allowed Trustees time to consider how the business could be made financially sustainable to meet the demands and expectations of the modern visitor whilst also preserving the Castle and its collections for future business’. 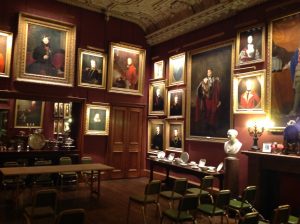 The AGM was held in the State Dining Room which holds one of the largest collections of family portraits in Scotland.

The Trustees decided that they needed to diversify their income generating stream whilst also conserving and promoting the heritage associated with the building, its contents and grounds for visitors.

Edward Maitland-Carew explained: “We hope that Thirelstane Castle will become a “Gateway to the Borders” for people travelling to and from Edinburgh and will provide much needed accommodation, events space and corporate facilities. The Castle recently hosted 1350 Americans at a Highland Games and fair in the grounds.”

“Events such the Vintage Car Festival held in June, Wild Outdoor Activity Camps, Historical re-enactment events and outdoor theatre enable us to share the Castle with the public and create a financially viable future. Thirlestane Castle is one of the largest and oldest inhabited Castle’s in Scotland and together with its hugely important place in Scottish history we need to ensure that we create a sustainable plan to hold it for future generations of visitors to enjoy.”

The successful application for match funding from LEADER is enabling the Trustees to carry out the first stages of the plans. Society members were shown the new event space in the Victorian Kitchen for weddings , private dining and groups, which can cater for up to 40 people. Together with upstairs servers which enables the State Dining Room to be used more easily for functions.

Dear Friends, Supporters and Colleagues, As we welcome 2021 here at the Scottish Civic Trust, we’re reflecting back on the successes of taking Doors Open Days and our annual conference digital in 2020 and eagerly Read more…

You can find out more about which cookies we are using or switch them off in settings.

The Berwickshire Civic Society holds contact data on all their paid members in order  to contact them about events and activities undertaken by the Society.

Members have the right to review their data, remove their data or restrict the use of their data.

The Society will not divulge personal information to any third party.

The Society holds contact details i.e. names,  addresses and phone numbers of all our members on a password protected spreadsheet.  This data is used by officials of the Society for notifications only.

Members can request to view the data we hold them and edit or remove their data from our members list by contacting the Honorary Secretary.

This website uses cookies so that we can provide you with the best user experience possible. Cookie information is stored in your browser and performs functions such as recognising you when you return to our website and helping our team to understand which sections of the website you find most interesting and useful.

You can adjust all of your cookie settings by navigating the tabs on the left hand side.

Strictly Necessary Cookie should be enabled at all times so that we can save your preferences for cookie settings.

If you disable this cookie, we will not be able to save your preferences. This means that every time you visit this website you will need to enable or disable cookies again.